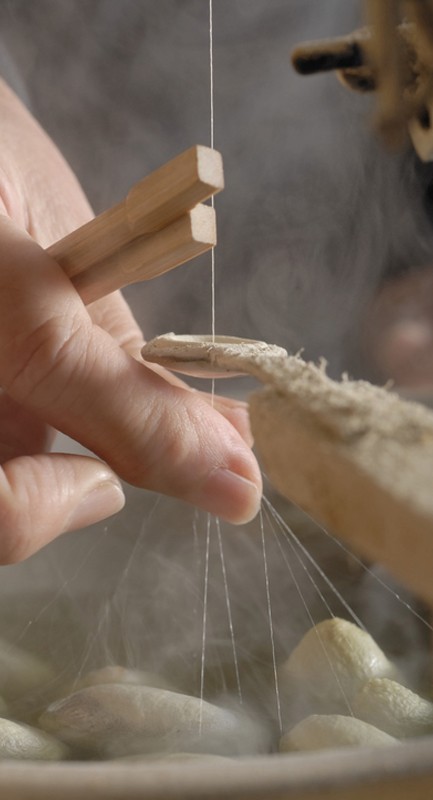 Silk, its origin and history.

Silk, like wool, is a natural textile material of animal origin, unlike other textile fibres such as cotton or linen, which are of vegetable origin. It comes from the cocoon made by the caterpillar of the bombyx, also known as the "silkworm".
Silk thread is a continuous thread of extreme strength, comparable to a steel thread of the same cross-section. Rare, sumptuous and unique in its technical qualities, silk has always represented luxury and distinction.
The origin of silk has the charm of a pretty tale. It is said that a Chinese princess discovered silk, 2700 years BC, by dropping a bombyx or silkworm cocoon into her cup of tea, which fell from a mulberry tree above her. A long thread is said to have unwound when she tried to retrieve the cocoon... For centuries, China held a monopoly on the production and trade of silk, symbolised by the legendary

The roads, crossing deserts and mountains to link Asia to Europe, were called the "Silk Road" and were used from the 2nd century onwards by caravans transporting various riches, of which the main and most prized commodity was silk.
The cultivation of silk began to spread in the West progressively on the eastern shores of the Mediterranean (Greece, Sicily) at first, and then spread to France from the 16th century onwards under the impetus of King Henry IV.
At the dawn of the 19th century, the capital of the silk industry in France was undoubtedly the city of Lyon.

Today, silk represents less than 0.2% of the world market for textile fibres. It is therefore a rare textile, which takes longer and is more complicated to produce than many other textiles. It is estimated that a silk article costs about 20 times more than its cotton equivalent.

Silk socks are particularly sought after for their incomparable softness. Perhaps even more than wool socks, silk socks are very comfortable to wear for both men and women. You don't need to have sensitive feet to appreciate them, their softness immediately seduces those who have the privilege of wearing silk socks. Surprisingly, because their thinness might suggest otherwise, they also offer perfect thermal protection, they are thermoregulating, which means that whatever the outside temperature, they keep the feet at body temperature. This means that no matter what the outside temperature is, they keep your feet cool when the temperature is high and prevent your feet from getting cold when it is winter.